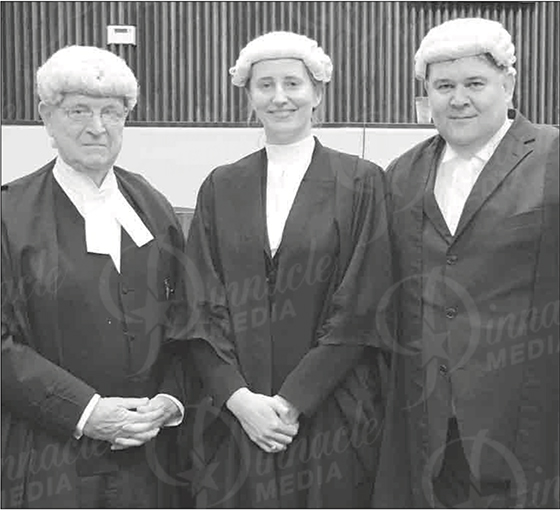 Attorney Joanna Dunne was called to Bar of the Cayman Islands on June 2, when Forbes Hare head of lit- igation Chris Young presented her credentials to Justice Charles Quin.

She also speaks and reads Mandarin. Ms. Dunne trained with Clifford Chance in their London and Greater China of ces. She practised as a Registered Foreign Lawyer at Ince & Co in Hong Kong followed by a move to the Middle East to work as a legal consultant, before starting with Forbes Hare.

“We are delighted to wel- come someone with Joanna’s ability and enthusiasm to the Cayman team,” Mr. Young said later. “Joanna brings some ex- cellent and unusual experi- ence that I am sure will be put to good use for the rm and its clients, particularly in the Greater China region.”

He noted that Forbes Hare is growing in Cayman fol- lowing the addition of Sonia Starvis and Bhavesh Patel in 2016, and Alistair Abbott ear- lier this year. He expressed con dence that Ms. Dunne will play an important role in the future of the rm.

Ms. Dunne provided some insight into her reasons for coming to Cayman. “Forbes Hare continues to strengthen its reputation and is well-re- garded in the offshore legal world, and I look forward to being part of the expansion of

Ms. Dunne trained with Clifford Chance in their London and Greater China of ces.

our Cayman offering. The cur- rent environment is a chal- lenging one for offshore ju- risdictions; however, Forbes Hare is going through an ex- citing phase of growth and this is a great time for me to join the team here,” she said.

Forbes Hare was estab- lished in 2005 and the Forbes Hare Group now employs over 40 staff across ve of- ces in the BVI, the Cayman Islands, London, New Zealand and Singapore. The rm’s core practice areas are litigation and insolvency, corporate, – nance, investment funds and private client and trusts.